The Surf Club is a historic building, an iconic oceanfront landmark at the northern end of Miami Beach.
It opened on New Year’s Eve 1930 and instantly marked the story as one of the most loved places by pioneers of the good life and Hollywood stars.
The Surf Club reopened after a five-year redevelopment as Four Seasons Surfside.
Architect Richard Meier re-designed the building as five monumental rectilinear glass blocks building that glitter in the sunlight: the Four Seasons Surfside reopened as a hotel, condominiums, and private club.
As the original coral-stone clubhouse was originally designed by Russell Pancoast in the “Mediterranean style” of the 1920s, the interiors, designed by Paris-based architect Joseph Dirand, revoke the golden age of the twenties being contemporary, intensely beautiful and artfully at the same time.
Ranieri Lava Stone partnered with Molteni, a leader in Italian designer furnishings, in this prestigious project.
We’ve been commissioned the newly designed Champagne Bar and the lava stone table tops of the restaurant, which occupy the very heart of the magnificent Surf Club.

There’s an ingenious interplay of textures in the materials selected by Joseph Dirand, and the crackle-glazed lava stone has been used both for the majestic bar counter, the restaurant table tops, and other accent elements as lava stone support for lamps.

The decoration under the bar counter was achieved using a green glaze over fluted stone tiles to produce a wave-like effect. The customization of the enameled lava stone fluted tiles for the bar counter claddings enhance the exclusivity of the champagne bar:

Over 3 mt lava stone slabs were used for the glazed top, hollowed inside to make it lighter:

The same white lava stone glazing, with its distinctive craquelé, has been applied to restaurant table tops and supports for lamps:

In our stone project, each piece is unique, as for the supports for the lamps:

All the lava stone pieces are custom elements: each detail from the cutting process to the finishes and the choice of enamels has been made to measure, step by step with Joseph Dirand team.

Here the final touch of the on-site installation:

We consider this project as a flagship in our portfolio as this represents our mission: as lava stone suppliers and consultants we partner with architects and designers throughout the creative stages of their stone-based projects bringing the project to the highest levels of achievement, up to the top result. 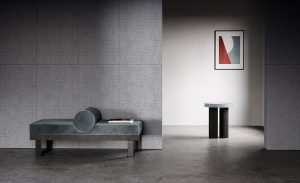